Happy Valley is the latest show viewers can’t hear. What to do, asks Stephen Armstrong. 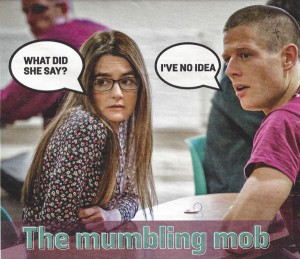 Why is Happy Valley 2 getting viewers so upset? Sally Wainwright is back with another cracking script, and directing it herself this time; and the nation’s sweetheart, Sarah Lancashire, is reprising the tough but troubled cop Catherine Cawood. Twisted Tommy Lee Royce is back, too, played by the newly anointed heart-throb James Norton. But it’s become yet another drama where the complaints have been lobbed in with the bouquets. It’s hard to follow, they say — and not because the plot is too fiendish, but because it can be hard to hear what the actors are saying.

This is a serial crime, apparently. Happy Valley joins the ranks of the many shows TV viewers have been telling newspapers they can’t hear: Jamaica Inn, Shetland, War and Peace (as reported in The Sun), Broad-church and Southcliffe. Clearly, something is amiss, but what?

The answer seems to be: almost everything. In an extensive, albeit unscientific, survey of sound technicians, actors and producers, I have uncovered a bewildering list of tricks and traps, from the technical to the petty and distinctly human, that have conspired to create what one senior sound man described as “a perfect storm… we’re right in the middle, and it’s a wonder anyone can hear anything”.

First, the human element: the actors and their crews. “There’s an increasing trend for mainly younger actors to pursue what they call ‘naturalism’ and what we call ‘inaudible’,” says Simon Clark, acting head of production sound at the National Film and Television School and the sound man on Wolf Hall.

“They’ll mumble — in some cases right down into their chest
— but if the sound guy says he can’t hear and could the actor talk up a bit, they say their character wouldn’t do that.”

Older or soap opera-trained actors can despair after scenes with a hot young mumbler. “You’re talking to them in the same room, with every other noise muffled, and still you can’t quite hear what they’re saying,” said one actress, who, like many people I spoke to, preferred not to be named. “It’s a freelance industry,” she said. “You don’t want to be seen as difficult.”

Directors, Clark says, have read the script many times and know what the actor is supposed to be saying — so they tend to hear completely clearly what viewers coming to the dialogue for the first time are struggling to understand. This might be what has gone awry in the otherwise brilliant Happy Valley. Wainwright both wrote and directed the script. She could tell what Lancashire was saying without even hearing her. In situations like this, Clark says, it’s down to the producer to lean on the director, the editor and the actor to get something usable. An executive producer of Happy Valley? Sally Wainwright.

Broadcasters often leap to the defence of talent, preferring to blame defective sound levels or poor mixing, as with Jamaica Inn — where Sean Harris and Jessica Brown Findlay’s mumbling elicited thousands of complaints. “I know the sound team on Jamaica Inn, and I heard that voice track — it was a clear and accurate representation of the sound on set,” a sound crew professional told me. “There were actors who were mumbling, plain and simple.”
The then head of BBC drama commissioning, Ben Stephenson, told reporters the Jamaica Inn issue was “more complicated” than actors’ diction. The BBC’s position is still that technical issues are part of the problem. And, to be fair to the broadcasters, sometimes it really is a technical problem, the result of the way high-end TV drama is recorded these days.

Although most TV is broadcast in old-school stereo — or 2.0 sound — an increasing number of shows, especially those made with international broadcasters or destined for export, are mixed in 5.1 sound.
This takes some unpicking. David Old, the head of sound at the London postproduction house Encore, says that drama dialogue is still recorded in mono, on single mikes (although, with multitrack recording, each actor’s radio mike can be separated). The result is then mixed in 5.1 format, consisting of five channels, three at the front — known winningly as left, centre and right — plus two surround channels in stereo and a subchannel that carries very low frequencies.
“Stereo is still the canvas used for longer-running series that began several years ago, when 5.1 was less prevalent — and for consistency they have not been upgraded,” Old explains.

This 5.1 sound is essentially the answer to a question the consumer wasn’t asking: its use has been led by the manufacturers keen to flog more kit, with broadcasters slightly dragging their heels. When a foreign sale is in prospect for a programme, in particular, dialogue is usually mixed onto a single track, so foreign broadcasters can simply delete it and record overdubs on it in their own language. Sales versions of hits such as Downton Abbey are exported without any dialogue, called an M&E (music and effects) version.

“When mixing all those tracks back down into stereo — the fold-down — it’s easy, even with the best will in the world, for the voice to suffer against the surrounding effects and music, especially if the composer is in the edit that day,” says another London postproduction house boss. “But even after that, things can go wrong.”

Whichever way sound is delivered to your set, there’s a further problem specific to the sleek, flashy flatscreen TVs we now covet. “TVs used to be made with speakers at the front, beside the screen — which is where they should be,” says Malcolm Johnson, company secretary of the Institute for Professional Sound (IPS). “With a flatscreen TV, the picture takes up everything, so the speakers are placed at the back of the set and rely on there being a hard wall behind it to bounce the sound off and into the room.”
If you are talking to someone and you turn your head away, Johnson says, you lose a lot of the detail of what they’re saying because the treble frequencies disappear — and a lot of our understanding of speech relies on higher frequencies for sibilants and soft consonants. Watching a flatscreen TV, especially if it’s in the corner or not close enough to a wall behind, is like listening to someone with your back to them.
These crucial treble frequencies can be boosted to aid clarity, usually when mixing down and transmitting the broadcast signal. This treble boost is typically applied in a box called a codec — which sits between the functionary at a broadcaster who hits the play button and the aerial/wire/dish the broadcaster sends shows out to. The codec is designed to correct sound imbalance. But, in some models, its digital settings can slip.

Simon Bishop, of the IPS — the man in charge of sound for the clearly audible series New Tricks — says that the models used by Red Bee Media, the company recently bought by Ericsson that the BBC has outsourced this role to, have recurring problems of this kind.
“At that point, the higher frequencies can be diminished,” Bishop says. “It can make everything incredibly hard to understand, even Strictly Come Dancing.” Red Bee declined to comment.

It is possible to buy a sound bar or full home-cinema speaker systems to help resolve this problem, but the mere existence of sound bars is about as clear an admission that set-makers have a problem to solve as it’s possible to get. This bar is essentially a speaker that sits in front of your screen, where speakers should be. The fact that you have to fork out an additional £100-£500 for this sound bar, on top of the possibly as much as £2,000 you’ve paid for that spiffy 65in 4K Ultra HD Smart LED TV, may seem a tad unfair, but who to complain to?

THE TOP OFFENDERS
The Wire So authentically “street”, every actor wants to sound as if they were in it.
Jamaica Inn Sean Harris and Jessica Brown Findlay delivered dark mumblings of doom from Cornwall.
Broadchurch Shockingly, even David Tennant dropped his precise RSC declaiming style, preferring to deliver lines as if they were a secret message.
Happy Valley 2 Sarah Lancashire’s inaudibility has inspired an academic to coin the term “audio opacity”.
Shetland Just to be sure no region goes untouched, the accents in this thriller have started to fill our You Say postbag.

Short of picketing drama sets and yelling at the actors to speak up, the simplest option may be to buy a six-speaker surround-sound home cinema system to plug into your set. This is how 5:1 sound is supposed to be heard. Each speaker carries a single channel, so the dialogue track has a speaker all to itself. Systems range in price from £200 to £1,500 and look like a load of little black boxes you have to scatter around your room in a precise ratio to maximise sound quality.
Or you could just switch on the subtitles.