The British sound recording fraternity contains many eccentrics, but perhaps none more so than Mike Skeet who sadly passed away in December 2015 after a short illness.

Mike Skeet with one of his unique mics.

Mike was an inspiration for a great many of us throughout the 70s, 80s and 90s, mostly through his enthusiastic magazine articles on DIY recording equipment and techniques. That passionate and extremely well-informed enthusiasm was even more infectious and compelling for those of us fortunate enough to have spent time in his company.

After serving his National Service in the Army during the early 1950s, Mike joined the GPO (General Post Office – the fore-runner of British Telecom) as a telephone engineer and spent 32 years with the organisation, eventually becoming an instructor at BT’s training centre based at Bletchley Park. In 1961 Mike married Sheena, and the Skeet family expanded over the following years with four sons, Simon, David, Mark, and Jason.

In his spare time Mike was a keen motorbike enthusiast, both as a means of daily transport and as a competitive sportsman, winning a First Class Award in 1957 at the Scottish 6 Days’ Motorbike Trials. Impressively, Mike continued riding motorcycles well into his 70s, and amazingly he sometimes even managed to carry all his recording equipment to venues on his motorbike! Mike was a lifelong ‘audio enthusiast’ but became seriously interested in music-recording in the late 1970s and this passion grew to the extent that he left BT in 1982 to become an independent classical recording engineer.

A helpful ‘leg-up’ onto his new career path came with the gifts of a pair of Quad Electrostatic loudspeakers and an early SoundField mic, while his GPO training enabled him to design and build his own mic preamps, mixers and other equipment. Mike started advertising his services, and his recording career snowballed quickly; soon he was working as a freelance engineer for commercial classical labels including ASV, Cantoris, Continuum, Faber, and Naxos, and many of his recordings were featured and highly praised by the like of the BBC and Gramophone magazine. Mike also set up several of his own labels, many specialising in niche areas like binaural music recordings, or steam train sound effects.

Always favouring ‘minimal’ microphone techniques, Mike rarely moved beyond a sensibly-placed stereo pair, occasionally supplemented with a few ‘spot’ mics when the layout or acoustic made it necessary. He was a strong advocate of both the Mid-Side technique (which had largely been forgotten in the 70s and 80s), and dummy-head/binaural techniques (which he first started using for location recordings in the 1960s). Indeed, Mike was very well-known for his intriguing DIY dummy-head arrays constructed from balsa wood, kitchen sieves, and foam – but they typically contained Schoeps microphones and produced superb recordings! When the discrete-channel surround-sound formats started to interest him towards the end of the 90s he developed surround-sound and height-capturing versions with five or more capsules, as well.

In fact, all of Mike’s home-made equipment looked incredibly ‘Heath Robinson-ish’ – it was a recognisable part of his eccentric character. His electronics were typically built into unpainted aluminium boxes plastered with Dymo labels, brightly coloured labels, and DIN sockets! (See image) However, all of his DIY designs performed to extremely high standards, and his bespoke mic preamps in particular comfortably outperformed many commercial products! 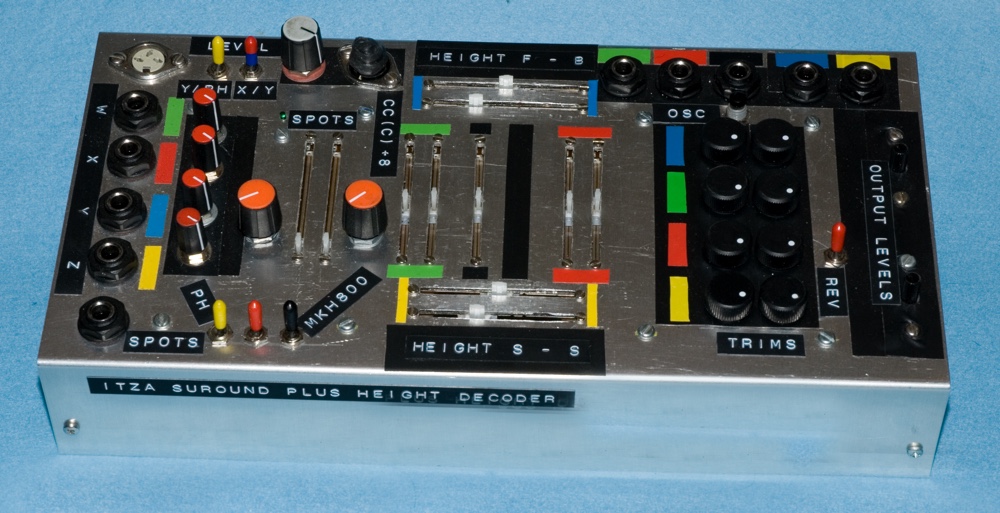 As a wide-eyed, teenage recording enthusiast I first came across Mike through his frequent contributions to most of the UK’s recording magazines – professional and hobbyist alike. His many features on mic techniques (especially Mid-Side and Binaural) were keenly lapped up, as were his constructional DIY electronics projects for preamps and mixers. I remember being puzzled, though, over why his hardware designs were always prefixed with the letters ‘ITZA’. When I first met Mike years later I asked, and with an impish grin he explained that it came from answering curious onlookers at his recording sessions pointing at his weird-looking electronics boxes:

That mischievous sense of humour is also encapsulated perfectly in Mike’s infamous ‘Garage Door’ recording which was released on a test CD published by Hi-Fi News and Record Review magazine in 1985. Mike wanted to demonstrate how the CD format could capture the ‘dynamic range of real life’ and, using a first-generation Sony PCM-F1 digital recorder and a SoundField MkIII microphone, he did just that. I won’t spoil the surprise, but it’s definitely a recording that’s well-worth hearing – bit with a cautious initial volume setting!

Mike was a brilliant, humorous, and eccentric man; an enthusiastic and ingenious experimenter always seeking new knowledge; a very talented and respected recording engineer; and a man with an unquenchable and infectious passion for all things audio which he was always happy to share with likeminded people. I doubt we’ll see his type again, and he will be missed.

Posted in News
← Rain is sizzling bacon, cars are lions roaring: the art of sound in moviesThe Mumbling Mob →