HRH The Prince of Wales has warned of a growing skills shortage in UK television training.

Speaking at the start of the RTS Craft Skills Masterclass Day held at the Hospital Club in London’s Covent Garden on 30 October, the Prince recalled how a conversation with documentary film maker John Bridcut and his crew led to him becoming concerned over a lack of training opportunities for would-be technicians.

He highlighted recent findings by Creative Skillset, which identified “significant skills shortages across all forms of production”.

“There are too few designers, mixers, editors, costume supervisors, camera and boom operators and digital imaging technicians,” warned the Prince of Wales.

Of 2,160 graduates who recently entered the TV industry, only 345 are employed in craft and technical roles – just 16%, calculates Creative Skillset. But the demand for skilled technicians is likely to rise significantly in the future.

“If we don’t plan to meet these future demands now, we will be ill-serving our television industry and minimising the employment opportunities for thousands of people,” said the Prince.

HRH added: “I hope this expertise will never be taken for granted or allowed to wither away, simply because of cost-cutting.” 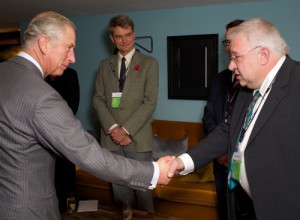 IPS Chairman Simon Bishop also spoke on the first day which was focussed on sound. He works on big entertainment shows but also other genres, too, including hit BBC drama New Tricks.

Getting the sound right for a location drama such as New Tricks presents different challenges to live entertainment shows.

“The difference is that we are not live so we can go again and can prepare,” he explained. “We tend to rehearse, set up, record – and if it is not right, we can do it again.

Posted in Craft and tagged training
← Walter Murch: searching for the sound of the God particleWhat does a £2,500 record sound like? →