A rare audience with Hollywood’s best editor, fresh from cutting Particle Fever, a documentary about the search for the Higgs Boson at Cern. 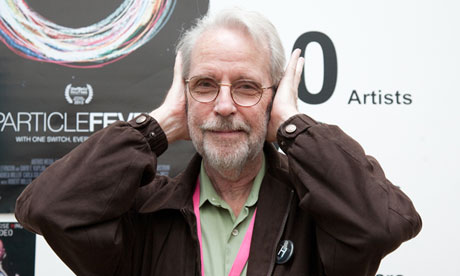 To relax, Walter Murch likes to sit in front of the TV. With a stopwatch. Counting the number of times a politician blinks as they give a speech. “I’m just fascinated by it, clinically,” he says. “I’ll be: ‘Can you believe it? He blinked 80 times a minute!’ Our normal rate is about 15 and so clearly something is at odds, mentally.” The record holder is still Dan Quayle (“a phenomenally high blink rate”).

For Murch, the eyelids are the window to the soul. Or, at least, to the synchronicity of brain and mouth. He tests the suppleness of his editing muscles by running a clip of film, noting where the actor blinks, then re-playing and halting at exactly that frame (there’s 24 of them a second). This is the key to his technique. If the actor is good enough, they will blink in character; this dictates where cuts should come. “When I can’t do that any more that will tell me I have to hang up.”

It has worked so far. He tested the theory on THX 1138 and American Graffiti and The Godfather, then doubled up on sound design and picture editing for The Conversation – perhaps his key work, the one with the sound engineer hero, the plot that hinges on inflection. He won his first Oscar for audio on Apocalypse Now (remember how the helicopter blades blur into the syncopated chop of the ceiling fan), won a couple more for work on The English Patient (Murch is a serial monogamist, loyal to Lucas and Coppola, Minghella and Mendes).

Yet his status as the most legendary editor working today (sorry, Thelma Schoonmaker) has not made him lofty. He turns up early for our interview, in a reconditioned school bus outside Sheffield station, to quietly promote Particle Fever, a documentary about the search for the Higgs boson. He is politely warm, speaks in perfectly composed and lucid sentences, pre-editing for you, knowing where the cuts should come. At first it is unnerving; you worry it is squashing spontaneity. Then you twig: if he hasn’t said this before, he is still able to utter it with more off-the-cuff eloquence than most of us could manage after a lifetime of sweating.

I can construct soundscapes that have an effect on people, but they don’t know why. It’s a sort of subterfuge. Sound kind of sneaks in the side door.

He has had a lifelong interest in particle physics, he says, an eagerness for “a grand unified theory that will explain what you had for breakfast this morning and what the breakfast was made of and what you’re going to do later. I personally don’t think that will ever happen. I think it’s a box within a box within a box. The interesting thing is the pursuit itself and what emerges out of the side of it.”

In between winning three Oscars, having four children, keeping bees and studying music, Murch recently investigated new links between the architecture of the Pantheon, the work of Copernicus and the origins of heliocentrism in western astronomy. Does the grand globe at Cern inspire him in the same way as the dome in Rome? Does he feel these days we are less awed by the beauty of science?

“Those who know the maths are bedazzled by the beauty of it. But, for the average person, it’s harder to grasp. Whereas in the 19th century there was a general passionate interest in science because it seemed to follow common sense.”

Artist as he is, Murch takes a scientific, nearly surgical approach to his work. He edits upright, and writes lying down, verticality being apparently more conducive to firing up that part of his mind. At 69, he still puts in 15-hour days. Like the physicists in the film, he is a pioneer, hungry for discovery, worrying at the limits. Aural literacy, he thinks, is still in its infancy. “This is a brand new experience in human culture. Early on in the evolution of cinema sound a number of theorists recognised this power and said the ability to manipulate sound creatively will redeem us from the chaos of shapeless noise. You think how long painting has been around and how that has shaped how we see the world over thousands of years; we’re at the beginning of this process.”

Evidence can be found in the limited range of our oral vocabulary. “There are many, many nouns for the act of looking – a glance, a glimpse, a peep – but there’s no noun for the act of listening. In general, we don’t think primarily about sound. So I have a different perspective on the world; I can construct soundscapes that have an effect on people, but they don’t know why. It’s a sort of subterfuge. When you photograph something it’s a direct appeal to their most conscious sense and so they know that they’re being a affected by what they see. Sound kind of sneaks in the side door.”

Partly, he thinks, it’s because of “a limitation of our biological evolution”. Though our eyes are expressive, our ears are simply trumpets. “What if we had eyes like C-3PO from Star Wars? Just fixed discs with no shift in them. And our ears were like dogs’ ears that could prick up or flop down or turn sideways and focus. I think we would then have more ideas about different ways of listening. Horses and dogs have mobile ears; primates don’t.” What about waggling? He smiles, ears firm and true. “Other than waggling, they don’t have articulation.”

Particle Fever closes with the mother of all cliffhangers. The “God particle” is discovered, but its energy state turns out to be dismaying. “Had it been a little stronger or a little weaker, the stability of the universe would have been guaranteed one way or the other. But at this value, it seems as if our universe is poised on a knife edge and could in fact start to eat itself without any warning.”

Murch’s eyes beam with poise and composure. He is not blinking. No, he has not yet dreamed of the universe imploding, he says. “If it does, we would simply be sitting here talking and then suddenly we would disappear. It would not be like: ‘Oh no, what’s that sound? Here it comes!’ You would have no advance warning. You would just turn from material structure into pure energy.” Murch is already both: a beautiful nucleus, atomising art for us all.