Deep inside a complex of secret tunnels in the Highlands stirs a sound which will reverberate through the ages. The world record for the longest echo ever discovered has been shattered by a hidden network of oil storage tanks in Rossshire. 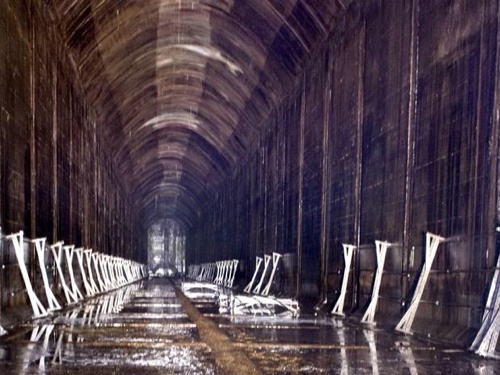 Acoustic scientists emerged from the Inchindown oil storage tanks, an underground fuel depot constructed during World War II, with proof that a gun-shot fired inside the tunnel resonates for a full 112 seconds. The discovery marks a resounding defeat for the previous record-holder for the longest echo found in a man-made structure, the Hamilton Mausoleum, also in Scotland, where the sound of the doors being slammed shut took 15 seconds to die away to silence. Guinness World Records has certified the findings made by Trevor Cox, Professor of Acoustic Engineering at the University of Salford and author of Sonic Wonderland: A Scientific Odyssey of Sound. Prof Cox had received a tip that the Inchindown complex near Invergordon might prove fertile territory for an echo test. Excavated out of solid rock between 1939 and 1941, the tanks were dug deep into the hillside amid concerns about the strengthening of Germany’s armed forces and the threat posed by long-range bombers. The tunnels were to provide a huge bomb-proof reserve supply of furnace oil for the warships of the home fleet at Invergordon, a key Royal Navy anchorage. Prof Cox had to enter the tank through one of the 18 inch diameter oil pipes because there are no doors. The tank was designed to hold 25.5 million litres of fuel and has walls 45 cm thick. The space is about twice the length of a football pitch, 9m wide and 13.5 metres high. Allan Kilpatrick, an archaeological investigator for the Royal Commission on the Ancient and Historical Monuments of Scotland, fired a pistol loaded with blanks about a third of the way into the storage tank. The results stunned Prof Cox, who recorded the response picked up by the microphones about a third of the way from the far end.

“It was like going underground into a Bond villain’s lair. But never before had I heard such a rush of echoes and reverberation,” Prof Cox said. “I started off just playing around, whooping and hollering. The sound just goes on and on and on.”

“Then when we fired the pistol my initial reaction was disbelief; the reverberation times were just too long. I knew immediately we had a new world record.”

At 125 Hertz, a frequency typically made by a tuba, the reverberation time was 112 seconds. Even at the mid-frequencies important for speech, the reverberation time was 30 seconds. The broadband reverberation time, which considers all frequencies simultaneously, was 75 seconds – the figure certified as a world record by Guinness. Inchindown’s six tanks were reportedly at full capacity during the Falklands War in 1982 but the depot was decommissioned and closed in 2002. Prof Cox said the tunnel’s extraordinary resonance could be incorporated into a musical composition, although the pipes are only accessible through limited guided tours.

“There are no doors so I had to be pushed in through the 18-inch diameter pipe. I threw my clothes away when I got out. Every surface was covered in oil. But you could play whole melodies with your voice, singing chords to yourself.

“Reverberation is central to classical music,” he added. “The notes hold for so long do you make meditative whale music, playing really slow notes. Or do you play fast and create a smog of dissonance? It would be interesting to write a piece of music to the pipes.”

Prof Cox was tipped off about Inchindown after the structure featured on BBC1’s The One Show. It delivered the perfect conditions for reverberation. “You need a man-made structure with no windows and a smooth concrete surface with pores to absorb sound. I didn’t think we’d find anything as reverberant as this.” Sound Effects: Typical reverberation times at mid-frequency