For drama location recordings, the hard disk recorder is king…or is it? Grant Bridgeman AMIBS investigates the practical uses of a laptop on location. 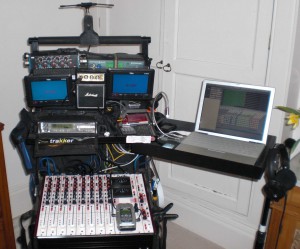 John Pearson MIBS’ sound trolley, set up with the 702T for the main mix and Boom Recorder running through a MOTU Traveler for the iso tracks.

The thought of using a laptop as a multichannel location recorder for drama usually results in pained expressions from production sound mixers for a whole host of reasons that tend to be quite valid and reasonable. However, there are a number of location recordists (especially in the USA) that are using a computer, either for their entire recording set up or as a significant part of it. So I wondered just how feasible it would be to build a system based around a laptop, how much it would cost, and what the real practical limitations might be.

A laptop recording system needs to provide the same functionality as a dedicated location recorder, of course, but as the system can be broken down into discrete components a choice becomes available for each element. There are three essential parts to the system: the computer, the software, and the audio interface. The options of computer and software are very intertwined for this application, as there only a limited number of software packages specifically designed for location drama recording and two of them are Mac-only. PC options would include SADiE’s LRX2 (which offers a combined hardware / software system, with a much higher potential channel count and a wider reaching application base that goes into post production with full DAW capability. It also includes the dedicated MTR version of the Sadie software which is suited to location recording work. There is also the imminent new option of the native SADiE 6 software coupled to a third-party interface of your choice. Or you could opt for a more generic DAW system which could offer the processing power, but might not easily perform those tasks specific to a location recordist (flagging takes with a false start for example). I don’t want to fuel the PC / Mac debate but it is strange that the available software is so Mac-biased. There seems to be an unwritten consensus that MacBooks are more rugged and robust than generic PC laptops (operating systems aside), which is not strictly the case. In fact, because of the PC’s open architecture it is much easier to obtain a PC laptop that is environmentally robust (to ‘military specs’ if necessary) when compared to a MacBook. For example, a standard MacBook is not even designed to operate in the full range of common UK weather conditions – Apple’s website quotes an operating temperature range of 10-35ºC. Compare that to the quoted -20 to +60ºC working range for a Nagra VI recording to flash card (and 0-50ºC with a hard drive), let alone the solid-state drive version of Sound Devices’ 788T-SSD recorder. Clearly, then, there will be a practical requirement to provide some form of basic protection for the computer (whichever flavour for the time being) from the elements and the hazards that exist on set. For many recordists, a laptop is already part of the tools taken on set – used for logging sound sheets, making quick corrective edits to audio files, playback, burning rushes at the end of the day, and so on – and these generally survive well enough. The addition of screen and keyboard protectors, along with a slim case or polycarbonate shell to cover the external housing would probably be sufficient to provide a basic level of protection, before the umbrella / easy-up made an appearance – at least for normal weather conditions in the UK.

Power to the People

There are three other pressing issues, though, starting with power. Production sound mixers have differing opinions about the use of the available power sources on-set, which range from “never touch it” to “always plug in when you can.” When local power is available the use of a laptop (and its interface) is not a problem, but the internal batteries of most laptops have distinctly limited capacities. Apple sells an inverter (from Kensington) that can be connected directly to a ‘car power supply’ – so would be adaptable to the familiar 4-pin XLR sound cart power connections. The second issue is that of the laptop cooling fan. Its impact would very much be dependent on the proximity of the trolley to the action and whether the recordist likes to keep the trolley at a discreet distance, or whether he or she prefers to be ‘in with the action.’ The third issue is that of connectivity to the audio interface itself. Since October 2008 MacBooks no longer have firewire connections, only USB. Currently, the MacBook Pro still has a FireWire 800 port, but there are few audio interfaces using this connection. The concern is that the maximum voltage available from a USB 2.0 connection is much less than firewire (5V as opposed to a theoretical 30V) and so could cause problems if providing phantom power when powered from the laptop rather than an external supply or separate mixer. 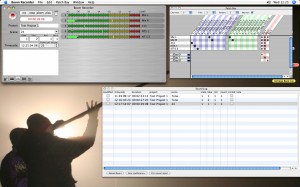 For the Mac user there were two options – Boom Recorder and Metacorder. Metacorder costs £1095 (+VAT) while Boom Recorder is no longer be available for purchase (due to a compatibility issue with Snow Leopard). Free time-limited trial downloads are available for both programs, though, and I’m told Boom Recorder is about to be superseded by a new version called Mirage Recorder from the same designer. Boom Recorder and Metacorder offer similar basic functionality, and make it easy to set up and record multiple inputs to a stereo mix plus iso tracks as an interleaved poly-wav. Both handle timecode in a similar way by decoding it from one of the audio inputs – the obvious downside being the loss of a channel on the audio interface. Of the two systems, Metacorder is the more polished, having a more professional interface contained within a single window. It is somewhat more immediate to use than Boom Recorder, and it feels like the operating system of a dedicated hard disk recorder. It also supports the use of a DVD RAM or CF card as a mirror drive, writing files in the background when not recording. There are also useful pull-down menus for common scene descriptions, and a very nice way of dealing with false starts. 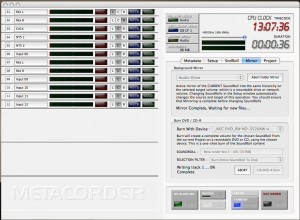 Metacorder’s slick appearance and operation is very similar to the operating system of a dedicated hard disk recorder, including mirroring options.

Boom Recorder offers more flexibility in its configuration; the patchbay window for example makes it possible to monitor any track through the software, and control the assignment of different channels to a number of different drives and files. Overall though, it is not as slick as metacorder, and there are some minor elements of its operation that could become annoying. Both programmes are fully implemented with metadata functionality, with easy ways of entering the relevant information concerning channel labels, user details and Take notes, as well as automatically creating log sheets. Importantly, users report that both systems are very stable and provide exactly the reliability that is needed when recording on set.

Examining the somewhat overwhelming computer audio interface market and from canvassing recommendations, there appeared to be a firm favourite for location work: the MOTU Traveler Mk3. It offers a great deal of connectivity and capability in one box (including a lot of signal processing capability that probably wouldn’t be needed on location) and is one of the few provides eight analogue audio inputs and outputs, digital audio inputs (AES and SPDIF), wordclock sync inputs, a 4-pin XLR power connection and a suitably robust build. If the requirement came to have more channels, it is possible to combine multiple Travelers, and both Boom Recorder and Metacorder have a 64-channel capability. Other possible options could be the MOTU Ultra-Lite mk3, or the Metric Halo 2882 – but neither offer such an appropriate feature set as the Traveler. However, there is a minor problem in that it (and the vast majority of professional-quality audio interfaces) uses a FireWire 400 connection. The common solution, though, is to use a FireWire 800 to 400 adapter cable.

The connectivity of the MOTU Traveler is very impressive – and there’s more on the side! (Including the 4-pin XLR power connection). 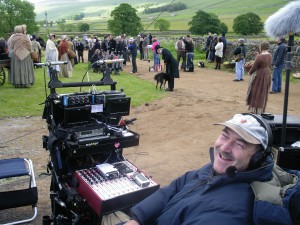 Of the different recordists currently using a laptop for location recording, the set up used by John Pearson MIBS is the one that appeared to make the best of both worlds. He uses a two-track hard disk recorder (Sound Devices 702T) for his main mix and daily rushes recorder, along with Boom Recorder running on a G4 MacBook with an early MOTU Traveler interface. Boom Recorder captures a copy of the mix tracks (via AES-3 digital connections between the 702T and the Traveler) along with the necessary iso tracks from the mixer via the MOTU’s analogue inputs. Timecode is captured from the 702T via an audio input on Boom Recorder. John has also increased the redundancy of the system by using a FireWire CF card writer connected to the 702T which provides the daily rushes on a small capacity CF card and reduces the chance of damaging the CF card slot on the Sound Devices machine. If the need arises for a portable kit, the 702T goes into the ‘hand bag’ with an SQN and all is well. The most common comment encountered when discussing the use of a laptop as a recorder with fellow recordists didn’t relate to specific bits of kit, but of matching both the working style of the recordist and the workflow of post production. JP’s system ideally suits him as he works primarily with booms, reaching for the radios only when needed – but his system may not be as suitable for those recordists who do use radios for every artist in a scene by default.

Dedicated hard disk (or compact media) recorders should offer a system that is robust (both software and hardware) and provide dedicated functionality suitable for the location recordist – far more so than a generic laptop which is inevitably designed to operate over a wide range of applications. Yet now, as computer operating systems are becoming more stable, a laptop running dedicated location recording software and coupled with a high quality audio interface can at least offer that same (software) functionality. Although there are already some using solely computer-based systems on a trolley (and successfully so), I suspect more recordists will start to see a laptop based system as a very cost-effective way to expand the channel count of an existing system….even if it won’t fit in the bag.

Thanks must go to those who’ve I’ve spoken to at length about the pro’s and con’s of using laptops on location. To name but a few: John Pearson, Ray Parker, Martin Gifford, Simon Bishop…et al

(Prices taken were very much ball park prices as they were found in early February 2010 (so not taking into account deals or combination offers etc, and all including VAT) Apple Macbook Pro £1736 MOTU Traveler Mk3 £ 640 Metacorder £1286 TOTAL  £3662

Posted in Craft and tagged Location
← Dancing on IceGreat drama – but can you hear what they’re saying? →