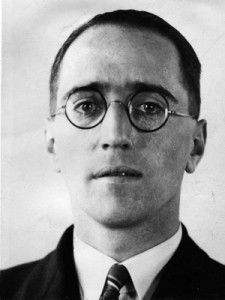 He’s the genius inventor who helped save millions of lives during the Second World War, but whose achievements went unheralded following an early death.

However, this is not the tale of Alan Turing – but Alan Dower Blumlein, who was killed in a plane crash while developing Britain’s superior airborne radar system.

Blumlein will receive long-overdue recognition on Wednesday when a commemorative plaque will be unveiled in his honour during a special ceremony at Abbey Road Studios. The inventor, who died aged 39, was a pioneer who logged  128 patents, including the “moving coil” microphone and the first stereophonic recordings, while working as an engineer for EMI.

He led the BBC team which successfully chose Marconi-EMI electronic 405-line transmission for the new television medium over the cumbersome mechanical alternative.

Like Turing, the brilliant mathematician who cracked the Enigma code, Blumlein, born to a German father and who did not learn to read until he was 13, turned his skills to the war effort.

Blumlein’s revolutionary “binaural recordings” used  two microphones, recording separately, with the results played in a single groove through two loudspeakers to create the effect we know  as “stereo”.

He incorporated the binaural system into aircraft sound detectors using a cathode ray tube to display the result. This allowed Blumlein’s team to develop an airborne interception system which allowed British planes to detect Germany aircraft by night.

Blumlein was killed in the 1942 plane crash which destroyed the prototype of his H2S radar system, which could locate and detect targets from the air regardless of the weather conditions. News of the accident was initially suppressed but one air chief called Blumlein’s death “a catastrophe”. A new research team completed the radar system.

The Institute of Electrical and Electronic Engineers Society will unveil the plaque at Abbey Road, owned by EMI-Universal Music, during a day of tributes to Blumlein, featuring rarely heard audio and video recordings from his archive and an airing for the world’s first stereo-sound film, Train At Hayes Station.

“Without sounding arrogant – absolutely yes. If you consider that Alan Turing’s ACE Model Computer used circuits developed by my grandfather you truly start to uncover how across the 128 patents that my grandfather filed, so many elements of our modern-day life have a link back to Alan Blumlein.”

He added: “With his work on long-distance telephone line interference, stereo, 405-line TV and radar he was a prolific British inventor and genius.”

Professor Anthony Davies, Emeritus Professor of Electronic Engineering at King’s College London, said: “Blumlein’s many contributions to electronic engineering are not as well known as they should be, and if this plaque helps to remedy that, it will be an extra bonus.

“He was deeply involved in the development of H2S, the radar system developed as a blind-bombing aid, which made a huge contribution to the success of night-bombing raids and which allowed accurate night bombing for the first time by the Allies.”

The plaque recognises Blumlein’s stereo sound achievements of the early 1930s. “All vinyl gramophone records which record stereo in a single groove use his inventions,” professor Davies went on.

“The EMI television system to which he contributed much was the basis of TV technology from the start of TV broadcasting from Alexandra Palace in 1936 until the recent change to digital technology.”

Posted in News
← IPS sells out at BVERain is sizzling bacon, cars are lions roaring: the art of sound in movies →