From footsteps on snow to beheadings, a Foley artist can recreate any sound. Meet Hollywood’s not-so-silent stars. 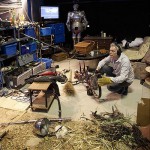 It may have passed you by, but the packaging for cornflour is changing – and, in one tiny part of the British film industry, it has created panic.

Foley artists are responsible for beefing up a film’s background noise – to make it sound as “real” as dialogue. For instance, they recreate the sound of a bird flapping its wings by blowing up a pair of kitchen gloves and then slapping them together in time with the action on screen. And, by squeezing paper cornflour packets tightly together, they recreate the sound of somebody walking on snow. But now they’re starting to pack cornflour in tins. And tins won’t do.

When directors shoot a film, they’re worried about capturing the action and the actor’s voice. Nothing else. Not the sound of a sword scraping against a tree, or a court shoe tiptoeing across a marble floor. Well, the sword is probably made of plastic – and the “marble” floor is probably painted plywood. So, when it comes to the edit, things don’t sound like they’re supposed to. Which is where the Foley artist comes in – to make the film sound “real”.

A few years ago Alex Joseph, one of the country’s premier Foley supervisors, was asked to recreate the sound of a head being chopped off for Ridley Scott’s Kingdom of Heaven. “Some people would have gone with a watermelon,” he tells me. “Or a frozen cabbage.” Instead, Joseph opted for green coconut: “The outside is fibrous. So it cuts like skin. And the hard shell sounds like bone. Inside is the jelly, which sounds like blood. When you slice into it, it sounds just like a human head. I imagine.”

When Joseph is using organic material, he will buy or cut it on the day of recording. That’s because, in the rarefied world of Foley, a plant that was picked two days ago will sound different from one picked five days ago. For the scene in Harry Potter and the Goblet Of Fire, where Harry has to negotiate a living maze, Joseph says he went to great lengths to get “the sound of a privet maze and all its nuances – it had to sound alive and dangerous”. For Quantum of Solace,

Joseph hired in some scaffolding and mocked up a Tuscan roof with tiles that he bought on eBay. And, in Charlie and the Chocolate Factory, he actually jumped into a makeshift swimming pool with a sack of Nutrient Agar powder to make sure the chocolate river sounded thick enough. “I was swimming about in the stuff all day,” he says. “But it was very gloopy. I had to take four showers to get it all off.”

The art of sound began in 1927 – when Universal employee Jack Foley helped turn the film studio’s “silent” Show Boat into a full-on musical extravaganza. Because microphones could only pick up on dialogue, Foley had to add in the other sounds later. He projected the film onto a screen and recorded the footsteps, the movement, the props – all in one track. He walked with a cane to create the footsteps of three people. He acted out the film, all over again.

Digital has made the business of Foley much easier. In the early days, the “sync” was fundamental – the sound had to match exactly what was going on. Now, it can be manipulated to fit. Technology has moved on, but Foley is still all about the “performance”.

Down a tiny lane, in the Buckinghamshire countryside, is the only studio in Britain to specialise solely in Foley. From the outside, Universal Sound looks like the home of a successful accountant. There’s a swimming pool in the basement, where the audio effects for Narnia were recorded, and the sounds for the Harry Potter computer games. In the middle of the house is the heart of the operation – three studios, with bunker-thick walls. 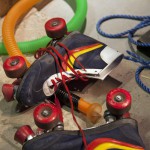 The main studio of Universal Sound looks like a student bedsit. In one corner there’s a car door, seat and steering wheel. In another there’s a kitchen. There’s also a bathroom and a living room with a sofa. “Each job brings a new prop,” says Foley artist Paul Hanks. And, by the looks of it, they never leave. There’s a suit of armour that Hanks wore for the fantasy series Game of Thrones, while Simon Trundle, Foley mixer, hit him with a mace.

Running along the wall of the studio, a Canadian miniseries is playing out in stop-start chunks. Hanks watches, and listens, picking out the important sounds. He then starts again, and records the Foley. Right now he’s struggling with the sounds of table football. If this was a different project – with a different budget – he would have rented a table. Instead, he’s ramming the handle of a broom into the spring mechanism of a toaster. “Too tinny,” says Trundle.

There’s no brief from the director of the Canadian miniseries. So it’s up to Hanks and Trundle to decide what needs to be recorded – and how. The best Foley allows for five days to produce a 20-minute film sequence – Hanks needs to have this 50-minute episode finished today.

The action culminates in a car, pulling up at speed, as a protagonist runs away. Hanks reaches for his box of “surfaces”, which contains everything from sand to gravel. He runs his suede gloves across Tarmac to recreate the sound of tyres. He then roots around in a box of shoes for “running”. He doesn’t match what the protagonist is wearing on screen – they wouldn’t sound right. “You don’t often walk in leather-soled shoes,” says Hanks. “They’re too click click. Desert boots are better.” Foley is the director’s friend. Often more than 80 per cent of film dialogue isn’t recorded “clean”. Maybe there was noise in the distance — a car, for instance. Foley can cover that up. It can fill in blanks, too.

“I remember on The Darling Buds of May,” says Hanks, “the story required there to be a horse in the stables behind the camera. But they had forgotten to film it. So they created the ‘feeling’ that there was another horse – with sound.”

Foley can also be used to rectify a continuity problem. If an actor is holding a file, but then forgets to bring it back into shot, a Foley artist can insert the sound of the file being put away off camera.

Joseph is in the studio next door, overseeing the Foley on Outside Bet, Bob Hoskins’s latest offering. Joseph has been responsible for the Foley on a wide range of film and television. But he still finds it a weird world. “And the people in it are slightly odd, shall we say. You are in dark rooms for too long. You do hear some stories about people doing horrible things to vegetables.”

Foley artists need imagination. “I go around Chinese supermarkets and select rather odd fruit and vegetables – things with odd textures,” says Joseph. He likes to use the scaly skin of a dragon fruit, for instance, as the scaly skin of a dragon. “And for the floating books in Harry Potter, I went down the Charing Cross Road in London to buy a lot of antique books. A newer book just wouldn’t have made the same sound.” Joseph even reworked classic Abba songs on Mamma Mia!, convincing a sceptical Benny Andersson to allow him to re-record the tunes with Foley artists cavorting in the dancers’ clothes.

Maybe it’s because of his training as a psychologist, but Joseph is interested in subliminal messaging. “Like the way Derren Brown flashes subliminal images to tell you something. But I use sound instead.” It’s a bit of a dark art. And one that he’s convinced will become ever more prevalent in the next few years, in computer games, for example.

“You can really play with people’s heads,” he says. “You could be implanting things that shouldn’t be there. I set up characters before they’ve even appeared in a game. Bad guys make a nasty sound, so that when they run on screen, before you even hear them speak, you’ve attached some psychological value to them. But you’re given the information in your subconscious.”

The work that Joseph is most proud of is the entire opening of Casino Royale. It’s a high-energy sequence, involving Bond and a villain chasing across a mess of girders and construction materials. “Most of what dominates the soundtrack of that sequence is Foley,” says Joseph.

Foley doesn’t begin and end in the studio – artists like to listen out wherever they go. Which is why Joseph ended up recording his own dental work – “I record anything that I don’t have in the library.” When he was doing the Foley for Cold Mountain, the Anthony Minghella film set at the end of the American Civil War, Joseph hung out at a Wild West village near Gatwick. “As long as it was early in the morning,” he says, “before the planes started taking off.”

Foley is bespoke, which is why Foley artists hate the stock nature of off-the-shelf library sound effects. Take the so-called Wilhelm scream – a sound effect first used in 1951 for the film Distant Drums. It has become Hollywood’s go-to shriek. It’s a cinematic sound cliché – a joke among sound designers – and has now been used in well over 200 movies, including everything from Star Wars to Transformers.

“If you watch 30 films,” says Joseph, “I guarantee that you’ll hear 100 sounds you’ve heard before. After a while it’s annoying. It’s not just the Wilhelm scream. There’s a fox you hear in just about every film – including Gladiator, in the middle of a desert, even though it’s a fox from the UK. I suppose there’s nothing wrong with it, but that’s what I like about Foley. It’s absolutely unique in every film.”

Sound of Hollywood could soon be virtual 30 Jul 2010