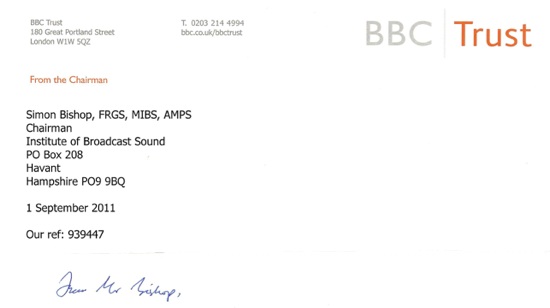 Thank you for your letter and for enclosing the letter written by Louise Willcox, headed BBC — Doing Less, But Making It Sound Better.

I note that at the Institute you have become increasingly concerned about what you feel is a decline in technical standards in UK broadcasting, and in particular the BBC.

One of the points you raise is music overwhelming dialogue. I recognise that one of the most common complaints to the BBC in recent years has been that some people ﬁnd it hard to hear the dialogue in programmes because of background music and noise.

However, the Trust is aware that the BBC is taking proactive steps to reduce the effect of background noise on audiences. BBC Vision’s Audibility project was a huge undertaking and resulted in the “best practice” guide for programme makers.

Producers are also told when there are a number of complaints on this issue relating to their programmes, and adjustments are then made in subsequent programmes in a series.

I should explain that the Trust sets the BBC’s strategic framework, but responsibility for operational and editorial decisions within this framework — such as the use of background music, dubbing, training, employment of sound recordists or self-shooting directors — rests with the BBC Executive, led by the Director-General.

As the Trust is therefore not in a position to involve itself in the speciﬁc points your letters raise, I have arranged for your documents to be brought to the attention of the Director-General, who will ensure a response from BBC management. I trust that this reply will answer your concerns.

I hope this is helpful and thank you again for bringing your concerns to my attention.

next – a letter from  the BBC Director General, Mark Thompson >>