The Electromagnetic Spectrum is the range of all possible frequencies of electromagnetic radiation.
See the excellent diagram reproduced by kind permission of Louis Keiner http://www.keiner.us/. 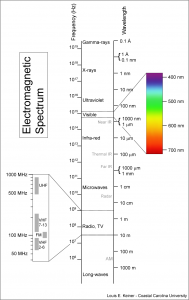 The sections of particular interest to IPS members are usually referred to as the Radio Spectrum (although they are mostly used for television!), and are:

covers frequencies in the range 300 to 3000&amp;nbsp;kHz, or wavelengths between 1000m to 100m, which includes the medium wave (MW) AM broadcast band.

covers frequencies from 30 to 300MHz or wavelengths between 10m to 1m. Main uses around the world include FM radio and Television Broadcasts.

covers frequencies between 300 to 3,000MHz or wavelengths between 1m to 1mm. Main uses around the world include Television Broadcasts, mobile phones, aviation communications, two-way radio and wireless LAN.

In the UK, the UHF spectrum for TV broadcasting has 49 channels within the range 470 to 862MHz, numbered 21 to 69. Each channel is 8MHz wide, enough for 8 radio microphone or IEM systems. Currently (January 2007) Channel 36 is used for radar and channel 38 for radio astronomy; Channel 69 is used for licenced and licence exempt wireless microphones; Channels 31 – 40 and 63 – 68 will become available for auction by Ofcom www.ofcom.org.uk/when all television channels transfer to digital, due by 2012 (the so-called Digital Dividend).