BLITS is a broadcast-specific line up tone system for use with 5.1 surround sound formats, and is currently being considered for formal adoption by the various standards bodies. It is already in use (2007) throughout the Sky organisation and by many independent OB companies. It is also being evaluated by the BBC and other broadcasters, and seems very likely to become the de facto standard.

The graphic below shows the construction of the test signal. 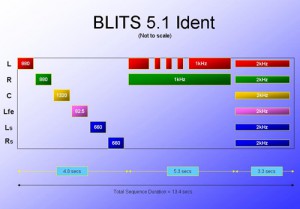 The first section comprises short tones at -18 dBFS to identify each channel. Different frequencies are used to help distinguish between the channels, and the ‘tune’ quickly becomes very familiar. Left and Right channels are pitched at 880 Hz, Centre at 1320 Hz, LFE at 82.5 Hz, and the two surrounds at 660Hz.

The middle section is only present on the Left and Right channels, again at -18 dBFS. This is intended to provide an ident that looks ‘normal’ when checking a stereo downmixed version. Continuous 1 kHz tone is present on the Right channel, while the Left channel is interrupted four times in order to differentiate it from EBU or GLITS stereo ident tones.

The final section provides a phase check for all channels using a 2 kHz tone at -24 dBFS. When summed to stereo using default down-mix values this should produce tones of about -18 dBFS on each channel.

The sequence repeats, taking roughly 14 seconds for each cycle. Unlike the EBU Line-up for multi-channel systems the channel idents don’t move around the listening room in a clockwise rotation. Instead, they reflect the AES standard of channel allocation: L, R, C, LFE, Ls, Rs. The reason for this is that multi-channel bargraph meters are generally configured with this channel order. A logical progression of tones across the meter is far easier to comprehend and to spot any missing or mis-assigned channels.

A full description of BLITS and the thinking behind it can be found in an article published in the Feb/March 2007 issue of Line Up. A hardware BLITS generator is available from CTP Systems.