Most mixers, except for portable types, have an associated Jackfield, also known as a Patchbay, either integral with the mixer frame or fitted nearby in a wall-mounted rack or free-standing console. The jackfield is used to terminate incoming lines from remote studios, tape machines etc and to provide access to the mixer line inputs and outputs, insert points etc.

NOTE: Although strictly speaking Jacks are female and Plugs are male, the terms Jack Plug and Jack Socket are often used. They are both Connectors.

A jackfield consists of horizontal rows of 20 to 26 jacks in a standard 19″ (482mm) width panel. In broadcast and other professional installations the jack plugs used will be ‘B’ gauge Longframe 1/4″ type (6.35 mm diameter, BPO 316, US MIL-P-642/2), and the sockets will have a pair of ‘normalling’ contacts which allow a circuit to remain connected until a plug is inserted in the socket.

Bantam jacks (TT – Tiny Telephone/MIL-P-642/13) may also be used, and their smaller diameter of 4.4&nbsp;mm allows up to 48 jacks to be fitted in a single row, with identical normalling facilities.

Interconnection between jack sockets (‘cross-patching’) is made using a flexible 3-core cable fitted with an appropriate plug at each end – a Double Ender or Patch Cord, hence the term ‘patch panel’.

A listen jack allows a plug to be inserted without breaking the circuit; dedicated listen jacks have no normalling contacts and are wired in parallel with the circuit which is to be monitored.

This is used where connections are normally required but may need interrupting. There are three types of normalling, half, single (or full) and double. The words ‘normalled’ or ‘innered’ are used after the above. ‘Innered’ derives from the physical layout of the contacts. The contacts that connect to the plug are the ‘outer’ ones, these break away from the ‘inner’ ones. 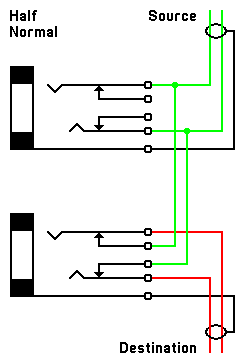 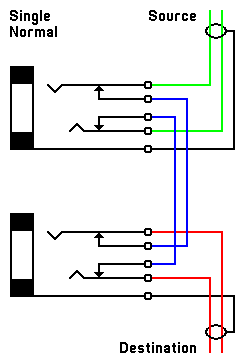 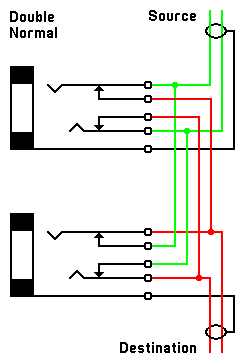 Jackfields were regarded for many years as unacceptable for low level (microphone) circuits by some recording studios, and microphone inputs used XLR connectors direct into the mixer. However, the BBC have always used jackfields for connecting microphones to mixers, the only difficulties encountered being with normalling contacts becoming tarnished. If sockets and plugs are cleaned regularly, jacks are perfectly acceptable for microphone circuits provided that normalling is not used in areas where corrosion can be a problem, and that any phantom power wiring is connected to the microphone source jack and not carried through from the mixer.