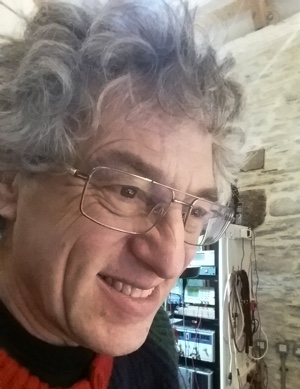 Chris began as a Technical Operator with the BBC, when 600 ohm resistors were mandatory, and “digital” meant counting on your fingers. Later, he invaded educational TV, mostly as an engineer, before finally moving to Cornwall with the aim of growing vegetables and milking goats, supported by occasional freelance work. Occasional became full-time, and he graduated from studio operations and mixing programmes to designing and installing studios, including the first-ever all-digital dubbing suite. He even managed to make 600 ohm resistors largely redundant.

After the upheaval in UK TV franchising (1990) he set up Broadcast Engineering Systems Ltd, earned money by repairing equipment, building and running suitcase OBs, and doing “electric handbag” location recording. He also formed a very productive association with Rycote Microphone Windshields. Together with Vivienne Dyer (the then owner) he gained an Academy Technical Award, and since 1997 has been Rycote’s technical consultant, designing most of their products including the “lyre” suspension. He is a Fellow of the Institute of Professional Sound, a member of the AES technical standards committee for microphones, a contributor to several magazines, and still grows vegetables, but has given up milking goats.