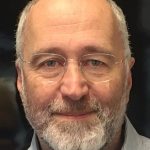 Simon Clark is a freelance location drama sound recordist. Hooked on the process of recording and reproducing sound from the age of 10 he started his professional life in TV sound post-production, he worked in documentaries for 15 years, travelling around the globe before making the world of location drama his professional home in the 1990’s.

A director of the Institute of Professional Sound he is a passionate advocate for structured training within the Film and TV industry. He is Head of Production Sound Recording at the National Film and TV School and writes regular articles for “Resolution” magazine.

TV drama credits include 8 series of “Waking the Dead”, “Line of Duty”, “Skins”, “Mad Dogs”, “Burton & Taylor”, “An Adventure in Time & Space”, and “The Go Between”. He was BAFTA nominated for “The Promise” and won the 2016 Sound Craft BAFTA for “Wolf Hall” both directed by Peter Kosminsky.